Acute Coronary Syndrome (ACS) refers to any condition attributed to obstruction of the coronary arteries which reduces blood flow to the heart, and includes unstable angina and myocardial infarction (MI).

Although it is not included under the umbrella of ACS, stable angina is categorised within ischaemic heart disease. Temporary discomfort occurs from a chronic flow limiting lesion within a coronary artery and occurs when the demand for blood supplied to the myocardium is increased, for example during physical exertion or emotional stress.

Clinical presentation, clinical history, electrocardiogram (ECG) and biomarkers are used to define ACS as follows which is summarised in the figure below. 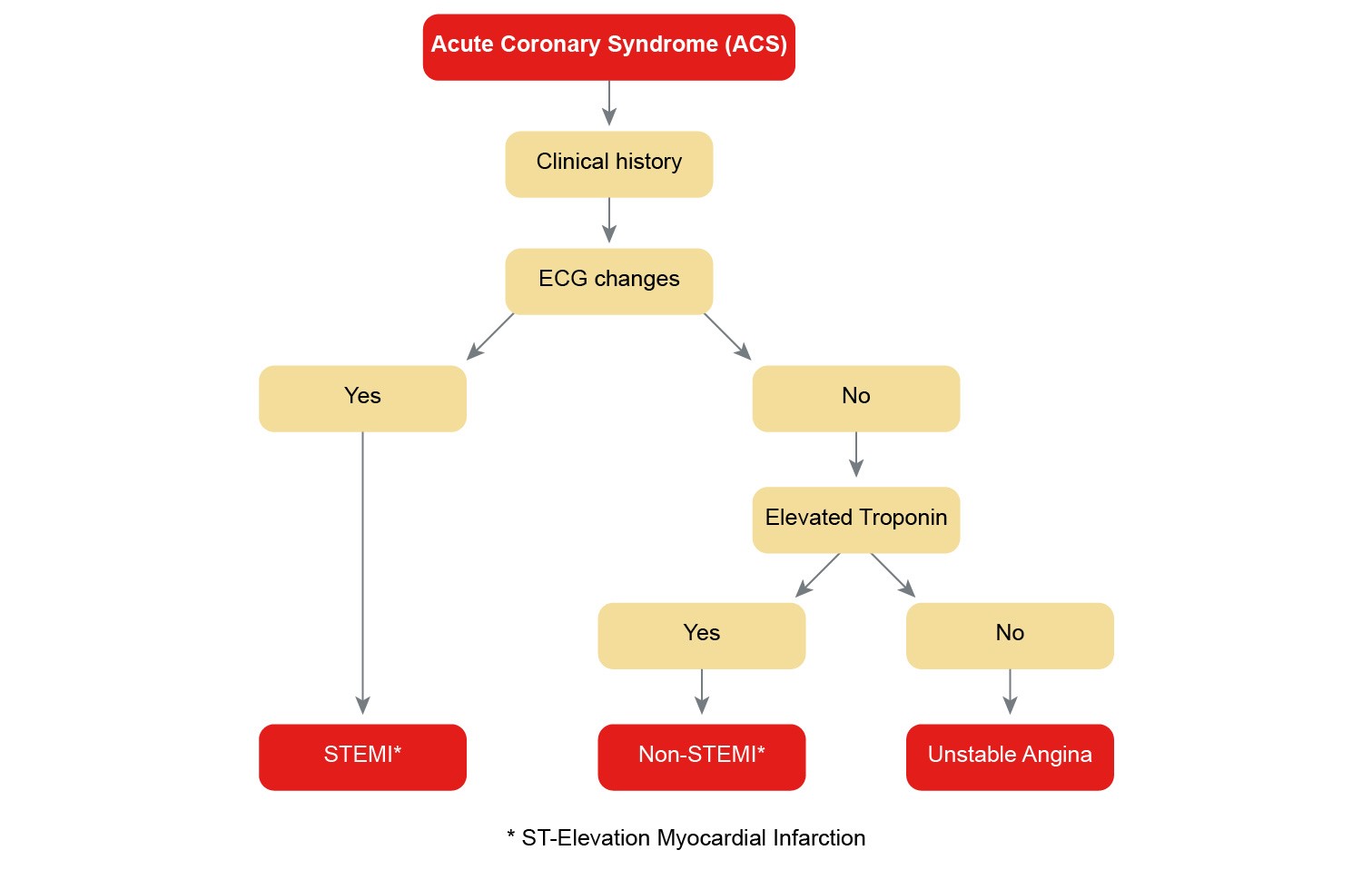 Ischaemia results from a reduced supply of blood and oxygen to the myocardium and is usually caused by a restriction or occlusion to at least one of the coronary arteries. The most common cause of ACS and sudden death is occlusion of a coronary vessel secondary to disruption of atherosclerotic plaque with subsequent thrombus formation.

There are generally two types of coronary vessel lesions:

The course of plaque development and progression is extremely complex and involves the interplay of multiple pathological processes.

The choice of treatment is governed by multiple factors including the:

Ischaemic symptoms vary from one individual to the next and may present in a variety of ways. This may include but is not limited to, discomfort in the chest, jaw, neck, back, scapular area, upper limbs or epigastric region. Symptoms may occur at a single site (e.g., chest only) or in various combinations (e.g., chest and upper limbs). They may also occur with exertion or at rest. The discomfort is typically non mechanical in that it is not increased or relieved with positional changes, and is often diffuse and not localised.

MI is the end point of this ischaemia that results in heart tissue death due to absence of an adequate blood supply. Generally, discomfort associated with an acute MI lasts at least 20 minutes and it may be associated with breathlessness, syncope, diaphoresis, nausea and/or vomiting. Due to significant variation in symptoms, an MI may be misdiagnosed as a musculoskeletal, neurological, pulmonary, gastrointestinal, or psychological disorder. Occasionally, an MI may occur with no symptoms at all as a result of silent ischaemia. Diabetics and those who have had previous MIs are at significantly higher risk of silent ischaemia.

Historically, women were often considered to have a lower risk of heart disease compared to men. Recent statistics however, show that heart disease is the leading cause of death for Australian women and 90% of women have at least one cardiac risk factor. More than 50% of women have two or more cardiac risk factors. Since ischaemic symptoms experienced by women often differ from those in men, women are often diagnosed at either an advanced stage of their disease or at the time of their MI. [#australian-institute-of-health-and-welfare-2010] As a result, public health campaigns are now more frequently aimed at improving recognition, diagnosis and management of heart disease in women.

Heart failure (HF) is a debilitating condition that is characterised by shortness of breath, fatigue and exercise intolerance. HF is a clinical syndrome that can result from any structural or functional cardiac disorder that impairs the ability of the ventricle to fill with or eject blood at rest or during physical activity. Changes to heart muscle tissue and function, neurohormonal changes, and vascular and skeletal muscle function changes are often referred to as the “vicious cycle” of heart failure as illustrated in the figure below.

Figure 2: The “vicious cycle" of heart failure pathophysiology
(Reproduced with permission from the National Heart Foundation of Australia) 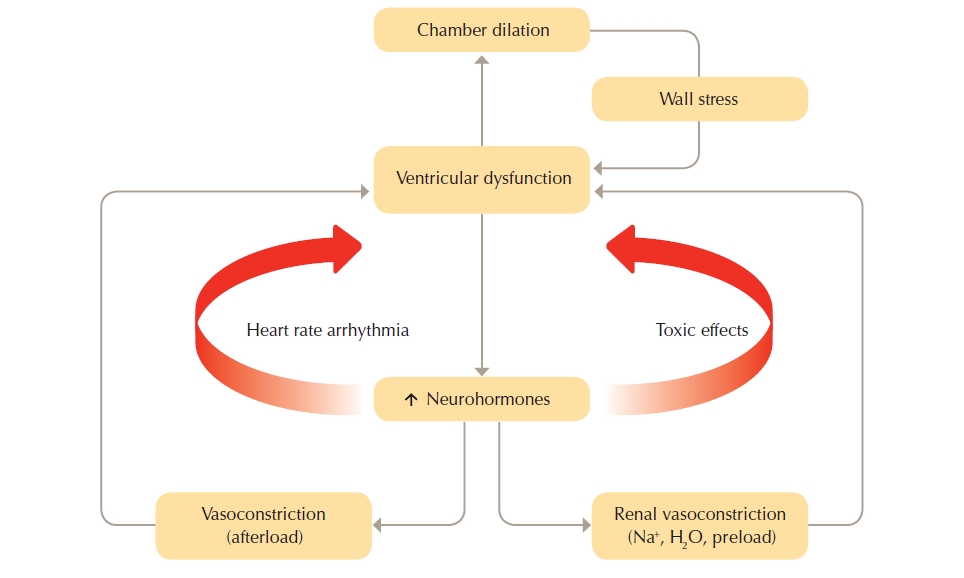 The cycle commences with insult to the myocardium. Neurohormonal compensatory activities are triggered when cardiac output declines.

The neurohormonal systems involved in the cycle of heart failure include the sympathetic nervous system (SNS), renin-angiotensin-aldosterone system (RAAS) and the natriuretic peptide system (NPS).

The SNS and RAAS work to increase circulating blood volume through vasoconstriction and sodium and water retention.  Over the long term SNS and RAAS over-activation may result in:

The NPS plays an important role in water and salt homeostasis by increasing sodium excretion in the urine.  When the heart is under stress due to increased filling pressures, B-natriuretic peptide (BNP) and atrial natriuretic peptide (ANP) are released.  The NPS counter balances vasoconstriction, caused by the SNS and RAAS, by promoting vasodilatation and diuresis and can be effective in the early phases of heart failure.  However, over the long term, NPS activation cannot effectively counter the adverse effects of over-activation of these systems.

The pathophysiology of HFpEF is less clear than in HFrEF.  In HFpEF, there is fluid overload and other symptoms without apparent reduction in left ventricular function. Current pathophysiological theories related to HFpEF include: coronary microvascular inflammation, central arterial stiffening, abnormalities in contractile and chronotropic reserve, and abnormalities in skeletal muscle oxygen delivery.

Heart failure (HF) may be classified in several ways. When defined according to ventricular function, there may be impaired contraction (heart failure with reduced ejection fraction) or filling (preserved ejection fraction) or a combination of both. The New York Heart Association (NYHA) classification summarised in the table below classifies heart failure according to the individual’s symptoms and physical function. See also New York Heart Association (NYHA) classification.

Heart failure with reduced ejection fraction (HFrEF), which was previously referred to as systolic heart failure, occurs when the ventricle, in particular the left ventricle, cannot contract properly and fails to effectively eject blood resulting in reduced cardiac output, i.e,. left ventricular ejection fraction of less than 45%.  This type of HF is the most responsive to pharmacological management.

HFrEF is most commonly caused by ischaemic or coronary heart disease resulting in inadequate oxygen supply or necrosis of heart muscle tissue secondary to infarction. Presence of hypertension is very common and can exacerbate the progress of HF. About 5-10% of HF is from non-ischaemic dilated cardiomyopathies. Other causes include cardiac valvular incompetence, uncontrolled chronic arrhythmias, viral cardiomyopathy, inflammatory cardiomyopathy, peripartum cardiomyopathy, alcohol related, medication related and thyroid dysfunction. See Causes of heart failure for further information.

HF with preserved ejection fraction (HFpEF) results from impairment of the left ventricle to relax and therefore fill with blood. This type of HF is also referred to as diastolic HF or HF with preserved systolic function. HFpEF is commonly seen in elderly women and is associated with hypertension, coronary heart disease and diabetes. Other causes may include valvular disease, hypertrophic cardiomyopathy and restrictive cardiomyopathies such as amyloidosis. See Causes of heart failure for further information.

Although HFrEF and HFpEF may coexist, it is important to establish which is affecting cardiac performance as pharmacological treatment is different . See Medications for heart failure.

Common causes of heart failure with reduced ejection fraction include:

Uncommon causes of heart failure with reduced ejection fraction include:

Causes of heart failure with preserved ejection fraction (HFpEF) include

Takotsubo ‘stress’ cardiomyopathy is a non ischaemic cardiomyopathy commonly associated with stress or an emotive event, which may lead to  acute HF. It is usually triggered by an emotional or physically stressful event and occurs more in woman over 50 years old than men.  In the early stages people with Takotsubos and heart attacks have a similar presentation, with chest pain, dyspnoea, abnormal ECG and blood tests.  Patients with this type of cardiomyopathy are commonly expected to fully recover and so are not often seen by the HF multidisciplinary team. [#mehmood-z-naheed-b-irshad-f-et-al-2014]