Exercise-based cardiac rehabilitation programs are effective in reducing cardiac deaths and have many positive health-related outcomes including improvements in fitness, symptoms, quality of life, sleep, and reduced feelings of depression and anxiety. [#oka-rk-de-marco-t-haskell-wl-et-al.-2000,#taylor-rs-sagar-va-davies-ej-et-al.-2014] Patients with known disease or those who have had cardiac surgery should be referred to a specifically designed exercise program.

The anti-atherosclerotic effect of exercise is in part brought about by improved endothelial function in response to increased vascular shear stress[#niebauer-j-cooke-jp.-1996,#dimmeler-s-zeiher-am.-2003] and by reduced chronic inflammation, which influences atherosclerotic pathogenesis and plaque stability.[#maseri-a.-1997]

Participation in habitual exercise not only improves physiological function, but can also enhance psychosocial outcomes.[#thow-m-ed..-2006]

There is strong evidence supporting the benefits of regular physical activity in people with heart failure (HF) and all patients should be referred to a specifically designed physical activity program, if available.[#National-Heart-Foundation-of-Australia-and-the-Cardiac-Society-of-Australia]  Benefits of exercise training include improved quality of life, cardiorespiratory fitness and reduced symptoms of fatigue and dyspnoea. The gold standard measure of aerobic fitness, peak oxygen consumption (VO2peak), is strongly associated with survival in HF patients and typically increases by 15-20% over a training period of 8-12 weeks, with some studies showing increases of up to 30%.[#myers-j-gullestad-l-vagelos-r-et-al.-1998,#pina-il-apstein-cs-balady-gj-et-al.-2003]

These improvements in cardiovascular fitness are predominantly due to peripheral adaptations, such as improved oxidative capacity of skeletal muscle and enhanced peripheral blood flow following aerobic training, and muscle hypertrophy following resistance training.[#crimi-e-ignarro-l-cacciatore-f-et-al.-2009] Resistance training complements aerobic exercise, resulting in strength increases of up to 40%, although outcomes vary substantially depending on the characteristics of the training intervention.[#volaklis-k-tokmakidis-s.-2005]  In 2007, a meta-analysis showed that cardiac dimensions and function could be improved slightly, but only with aerobic exercise rather than resistance exercise.[#haykowsky-m-liang-y-pechter-d-et-al.-2007]

Recent work has raised the possibility that vigorous or high-intensity intermittent exercise may offer superior benefits to HF patients compared with low-to-moderate intensity continuous aerobic training with regard to VO2. This approach should be limited to specialist centres with rapid access to medical support until safety is more definitively established

Psychological benefits of exercise training include reduced depression and anxiety, and improved quality of life.[#oka-rk-de-marco-t-haskell-wl-et-al.-2000,#taylor-rs-sagar-va-davies-ej-et-al.-2014] HF patients who exercise regularly also have better clinical outcomes.[#piepoli-mf-davos-c-francis-dp-et-al.-2004,#smart-n-marwick-th.-2004]  The largest exercise training study in HF, the HF-ACTION trial, randomised 2,331 patients to aerobic exercise or usual care. After adjusting for predetermined prognostic factors, exercise training was associated with a 15% reduction in all-cause mortality and decreased the number of hospitalisations due to HF.[#oconnor-c-whellan-d-lee-k-et-al.-2009]

Is exercise safe for patients with heart failure?

To date, research studies have been conducted predominantly in patients with stable symptoms (New York Heart Association [NYHA] Class I-III) and in young males. In these cohorts, moderate-intensity exercise is well tolerated. There are published data on over 125,000 patient-hours of exercise in clinical studies and, to date, there have not been any deaths directly related to the effects of exercise training in any of these studies.[#chen-ym-li-zb-zhu-m-et-al.-2012] Notably, however, exercising patients have fewer episodes of decompensation and other serious events than those who do not exercise.[#chen-ym-li-zb-zhu-m-et-al.-2012]

Training the periphery is a specific objective of exercise in cardiac patients because the locus of limitation commonly lies in the skeletal muscles.

Exercise prescription is characterised by the following variables, known as the FITT principle:

The total amount (dose) of exercise is a function of its intensity, duration and frequency. This total quantity is the main determinant of outcomes. Exercise prescription must consider these variables in combination as they influence both potential training adaptation and the level of fatigue to be expected.

The hallmark of heart failure (HF) is exercise intolerance due to shortness of breath and fatigue. In people with HF, skeletal muscle function is often impaired and may contribute to symptoms that are experienced.

There are several reasons why skeletal muscle dysfunction or atrophy occurs: 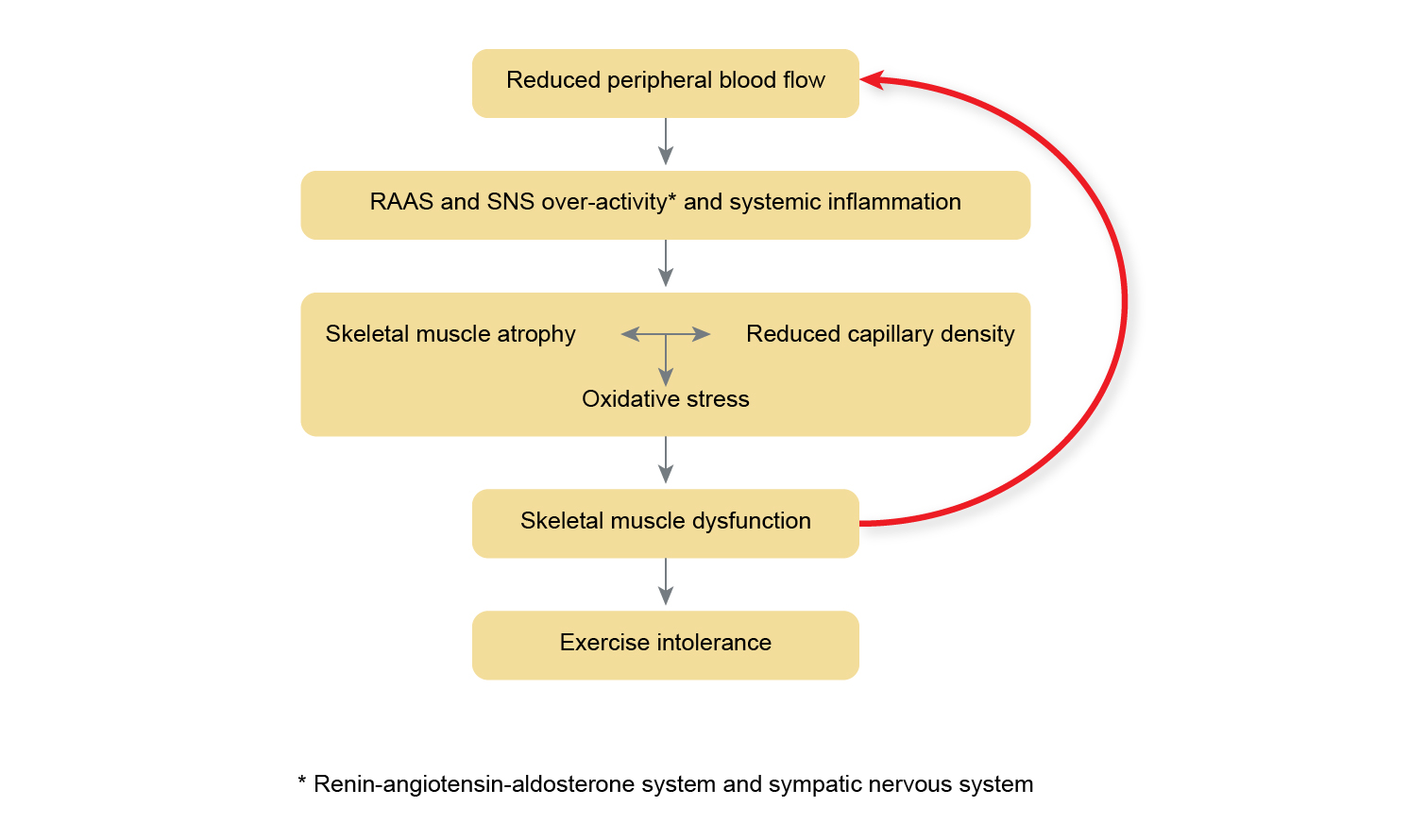 When prescribing exercise for patients with cardiac disease, it is important to consider the underlying physiology of the cardiac condition. For more detailed information, see exercise for specific clinical conditions.

Individuals with ischaemic heart disease, but not HF, can be prescribed longer continuous exercise tasks unless they are limited by angina symptoms. Furthermore, the use of resistance training may be less detrimental to cardiac function in these patients. The presence of co-morbid diseases such as diabetes or chronic obstructive pulmonary disease (COPD), however, may require the exercise intensity and volume to be adjusted according to symptoms and not age expectations.

Exercise intolerance is a hallmark feature of HF with the primary limitation being impaired cardiac output (CO).   A CO of approximately 5 litres per minute is needed to sustain organ function and prevent symptoms of exertion. Healthy people can raise their CO to 15-20 litres per minute during physical stress, however patients with HF, may not be able to increase their CO to the same extent during exertion.

For patients with HF, there is often insufficient blood delivery to working muscles during exercise which is often compounded by a smaller skeletal muscle mass served by a deficient capillary bed. The net result is that the ability of someone with HF to extract oxygen from the blood is impaired. With consideration to the Fick equation, this means that CO is impaired in patients with HF, while the arterial-venous oxygen difference is also abnormally low.

The exercise guidelines for HFrEF and HFpEF are effectively the same, with both groups benefiting to a similar degree from aerobic exercise.  For older and frailer patients, as is commonly the case for those with HFpEF, resistance training may play a more significant role.  In these patients, resistance training aims to improve the active muscle mass available during physical exertion without the risk of compromising systolic function.

Functional class is also relevant when prescribing exercise. Most patients with heart failure symptoms classified as NYHA functional class II and III are able to attend and complete group exercise rehabilitation programs if accessible. However, some patients with class III and IV symptoms may benefit from supported home-based exercise approaches whereby exercises can be tailored to a lower intensity level and progressed more slowly to accommodate the individual’s level of fatigue and function.