Smoking triples the risk of acute myocardial infarction (MI) with increased risk associated with a greater number of cigarettes smoked per day. People who smoke 40 cigarettes per day have a 9 fold increased risk of acute MI. Relapse back to smoking following hospital admission for acute coronary syndrome (ACS) is high, with 33% returning to smoking 30 days post admission.[#chow-ck-jolly-s-rao-melacini-p-et-al.-2010]

Smoking increases cardiovascular risk by promoting platelet aggregation and consequent thrombus formation. It also directly affects metabolism of several medications and dose adjustment may be necessary depending on the amount smoked.

Cessation of smoking leads to relatively quick reduction in the excess cardiovascular risk with a rapid reduction of the pro-thrombotic state occurring within weeks of quitting.[#benowitz-nl.-2003] For those who smoke 20 or more cigarettes per day, the excess risk of acute MI is halved after 3-5 years of quitting.

Smoking cessation is cost effective and has similar clinical efficacy to other risk factor management such as treatment of hypertension and hypercholesterolaemia.[#mendelsohn-c.-2013]

Nicotine is the addictive component of tobacco products, but it does NOT cause the ill health effects of tobacco use. Managing nicotine dependence requires an understanding of physiology.

Nicotine is a short acting substance (half-life approximately 40-120mins), with the major metabolite being cotinine. Due to genetic variation, some individuals metabolise nicotine faster than others. Fast metabolisers tend to be more addicted, smoke more and have a higher risk of lung cancer.

Upon inhaling a cigarette, nicotine is rapidly absorbed into the pulmonary venous circulation and within seconds is transported to the brain where it elicits the expression of a number of neurotransmitter substances including:

Smoking also affects the rate of metabolism of other substances including:

In general, nicotine withdrawal symptoms manifest within the first 1–2 days, peak within the first week, and gradually subside over the next 2–4 weeks.[#hughes-jr.-2007] Strong cravings for tobacco may persist for months to years after cessation.[#benowitz-nl.-1992] These cravings typically are psychologically motivated, not physiologic, and can be ameliorated using cognitive or behavioural coping strategies. Sometimes a simple change of surroundings can help alleviate cravings, such as leaving the office to step outside for a breath of fresh air, or taking a quick walk up a flight or two of stairs to get some exercise.

To alleviate the symptoms of withdrawal, smokers re-dose themselves throughout the day. The figure below depicts the typical nicotine addiction cycle a cigarette smoker experiences on a daily basis. 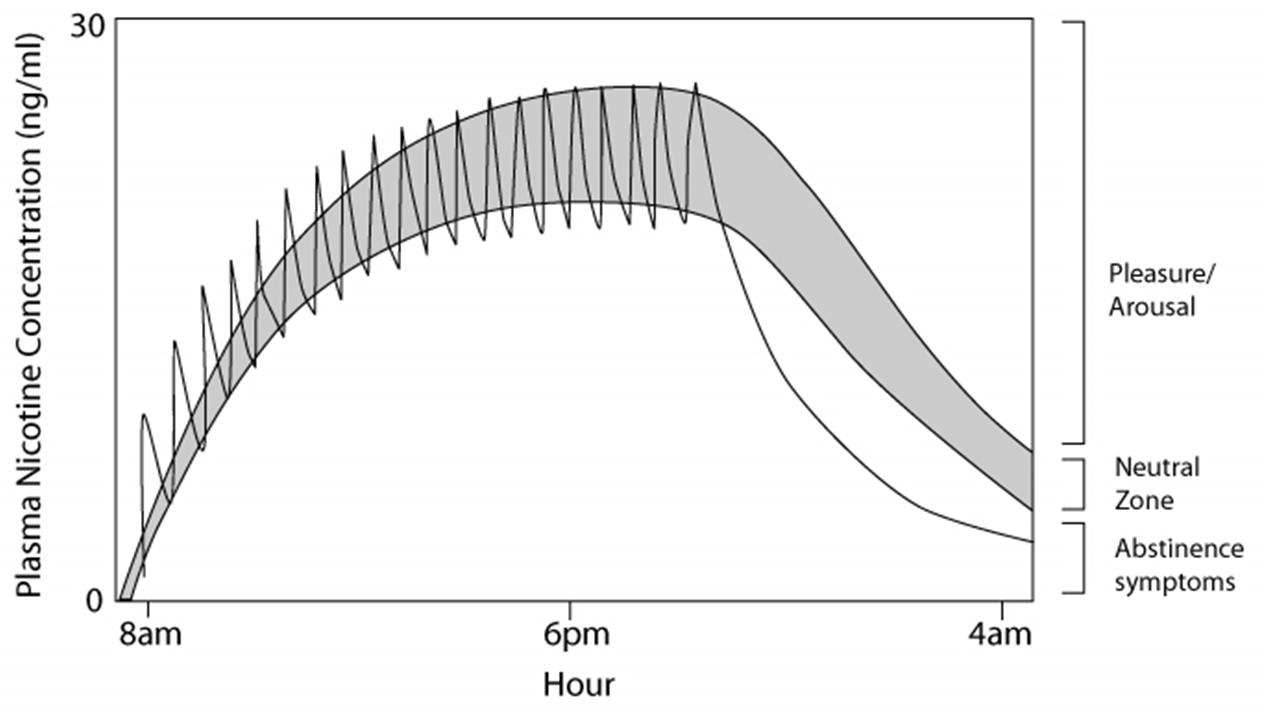 One practical method for implementing smoking cessation counselling in clinical practice is the 5A’s approach).[#fiore-mc-jaen-cr-baker-tb-et-al.-2008]

See also comprehensive guidelines such as the Supporting smoking cessation: A guide for health professionals.

A1: Ask about tobacco use

Systematically identify all tobacco users at every visit. Assessment should determine smoking history, readiness to quit and level of dependence.

A2: Advise to quit

Smokers should be strongly advised to quit and at the very least, should be actively encouraged to consider quitting. The message should be clear and strong, delivered without judgment, and should be personalized and sensitive.

Tone and manner should convey a concern for the patient’s well-being as well as a commitment to help them quit, when they are ready. Another useful approach is to personalize the message by linking tobacco use to current health or illness; its social and economic costs; the patient’s motivation level and readiness to quit; or the impact of tobacco use on children, or others in the household.

Using a genuine and sensitive approach that acknowledges the difficulty of what is being requested, the clinician is more likely to move the patient forward in the process of preparing to quit.

A3: Assess willingness to quit

After advising the patient to quit, the next step is to assess the patient’s readiness, or willingness, to try to quit.

When determining readiness to quit, consider

A4: Assist with smoking cessation

Management should be determined by the patients’ readiness to try to quit and should be tailored to individual needs.

If the patient is ready to quit (i.e., in the next 30 days), a treatment plan should be devised which includes counselling and pharmacotherapy if appropriate. Additionally, a ‘harm reduction’ approach could be considered for those not wishing to quit immediately, using for example a nationally approved ‘pre-quit’ nicotine replacement therapy.[#national-institute-for-health-and-care-excellence-nice-2013,#the-royal-australian-college-of-general-practitioners.-2011]

A patient who recently quit (i.e., in the past 6 months) requires continued support and encouragement, and reminders regarding the need to abstain from all tobacco use—even a puff. A patient who has been off of tobacco for more than 6 months typically is relatively stable but often needs to be reminded to remain vigilant for potential triggers for relapse.

The non pharmacological approach to smoking cessation should include the following components:

Behavioural interventions that have been shown to be effective for supporting smoking cessation suggest:

Adding pharmacological management to counselling significantly improves abstinence rates.[#fiore-mc-jaen-cr-baker-tb-et-al.-2008] Nicotine replacement therapy (NRT) can be delivered in a number of ways. Peak plasma concentrations are higher and are achieved more rapidly when nicotine is delivered via cigarette smoke compared to other NRT formulations. Among the NRT formulations, the nasal spray has the most rapid absorption, followed by the gum, lozenge, and inhaler. Absorption is slowest with the transdermal formulations. Because NRT formulations deliver nicotine more slowly and at lower levels (e.g., 30–75% of those achieved by smoking), these agents are far less likely to be associated with dependence when compared to tobacco products.[#choi-jh-dresler-cm-norton-mr-et-al.-2003,#fant-rv-henningfield-je-nelson-ra-et-al.-1999,#schneider-ng-olmstead-re-franzon-ma-et-al.-2001]

See Nicotine dependence for more information on the physiological basis of NRT.

The table below summarises the pharmacological approach to smoking cessation.

During the follow-up contacts, key dates should be documented (e.g., quit dates, tobacco-free anniversaries) and important milestones acknowledged. Patients should be congratulated for their success. If tobacco use has occurred, the circumstances should be reviewed and a commitment sought to return to total abstinence. The patient should be reminded that lapses (slips) occur as part of the normal learning process and should be viewed as such. Pharmacotherapy use should be assessed, including compliance and side effects experienced. When appropriate, referral to more intensive treatment should be considered.

In the absence of time or expertise, clinicians should, at a minimum ask patients about tobacco use, advise them to quit, and provide information about other resources for quitting, e.g., Quitnow. Referral should be made to those with specialist experience such as the Quitline, smoking cessation specialist or a local cessation program.

As with recent quitters, clinicians must evaluate the status of the quit attempt. Has the patient had any strong temptations to use tobacco, or any occasional use of tobacco products (even a puff)? Patients might be particularly vulnerable to relapse during times of extreme stress.

Also, it is important to ensure that patients are appropriately terminating or tapering off pharmacotherapy products.

Predictors of relapse include:

Relapse prevention strategies should be discussed as needed, and healthy behaviours should be encouraged, i.e., ones that the patient does not associate with tobacco use such as exercise, hobbies (particularly ones that involve use of the hands), and going to movies with friends. To reduce weight gain which often occurs after quitting, especially in women, it is important for patients to maintain a healthy diet.

Patients who have stayed off tobacco for 6 or more months should be congratulated for their enormous success. Remaining tobacco-free is a continuous process of learning how to cope with this change. Clinicians should acknowledge, reward, and reinforce the patient’s triumphs in the face of this challenge and continue to assist patients throughout the quit attempt.

Behavioural change is a process, not a single step. It is not uncommon for patients to experience at least one relapse episode. This should not be regarded as a failure on the part of the patient or the provider, but rather one of the many possible steps within the process of establishing long-term change.

Some experts advocate vaping (e-cigarettes) as a form of tobacco harm reduction. However  there is a need for high quality research to establish the long term safety and efficacy of these devices[#national-health-and-medical-research-council]. As the safety of vaping is not yet established, first line therapy for tobacco harm reduction should include nicotine replacement therapy (NRT) in the form of nicotine patches, gum, lozenges, and inhalors; and non-NRT (varenicline and bupropion) which have been evaluated for quality, safety and performance.  The availability and legality of nicotine vaping varies in different jurisdictions internationally.